Thursday morning, 9:15 am, the sun was, well it wasn’t shining but so far it had been dry and everyone had their fingers crossed for the participants of Sport Relief’s latest challenge it would stay that way. This year, footballing legends Alan Shearer and Robbie Savage made Media City, Salford, their home for 57 hours. In an ongoing football match, Shearer and Savage went head to head again, in a ‘Battle of the Five-A-Sides’, and with Manchester City’s Joe Hart launching the start of the match, the next 57 hours would be full of triumph, determination and a pitch full of competition.

People had applied to be part of either Team Shearer or Team Savage in the hope of helping their captain win the title, and with help from some very special guests, the competition at Media City really got going with the BIG question, who was going to win?! With appearances from ex-Manchester City/West Ham and England Player Trevor Sinclair, the One Show’s Angellica Bell, DJ and promoter Fatman Scoop, James and Oliver Phelps aka Fred and George Weasley, Manchester United’s Adnan Januzaj, youth teams from local and national teams, Media City was not short of support or players!

As this was a Sport Relief match, things were obviously going to be more challenging than your standard match, and five of these incredible celebrities signed up to be part of a 12-hour long stretch playing football. Pretty impressive, right? The 12-hour stretches were taken on by footballing legends Robbie Savage and Alan Shearer, music hotties Danny Jones (McFly) and Josh Cuthbert (Union J) and Countdown’s Rachel Riley.

I went down to Media City on Thursday and Friday night to show my support for such an amazing cause and it was freezing! Sitting in the crowd seats clutching a large coffee and wrapped in my scarf and blanket, I was watching the players feeling loads of respect for everyone who was participating, but even more for the 5 players who were each doing a 12-hour stretch. The atmosphere at Media City was incredible, and come rain, shine and even snow there was always supporters in the crowd stands there to support everyone who was playing. The determination of some fans was incredibly impressive, and 3 fans of Union J’s Josh Cuthbert actually stayed the full 12 hours he played to give him their support and encouragement. Tasha, Renae and Claire ( @TashaBaskey12  @renaescottt and @Clairelea_90 ) survived the full 12 hours outside supporting Josh and they even got their own medals for staying to support him, which was an incredibly cute moment. Well done girls, you 3 are a lot braver than me! The determination they showed to stay was fantastic, and put my 6 hours I stayed to shame!!

After the injuries, snow, rain and a hell of a lot of determination, Saturday saw the end of what was a mentally and physically challenging football match. The overall winner was Team Shearer by 18 goals. Well done to everyone who took part, and it’s not too late to donate. Your money could make so much difference to Sport Relief, and every penny counts, nothing is too small. Head over to the Sport Relief website to donate https://secure.donate.comicrelief.com/?utm_source=bbc&utm_medium=link&utm_campaign=five_a_side&cartId=SR16_DONATE_5_A_SIDE and help an amazing charity make a difference for people. 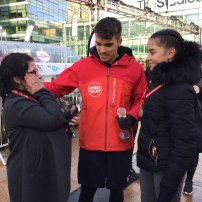 The girls and Josh 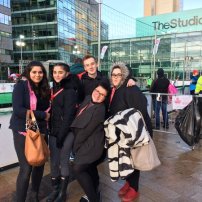 The 3 determined girls, my friend, and I. 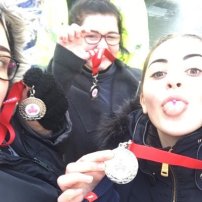